Lady Karame had asked this guy to write her a report and she expected him to have finished it but she found out he was just starting. She was pissed and she dominated him cruelly. She made him stop what he was doing and she had him lick her high heels. The angry mistress threatened to trample him with her high heels if he did not finish the report quickly.

Lady Karame had not punished her slave in a while and she could tell that he was beginning to take advantage of it and disobey her. She felt it was time to punish him so she did it using her high heels. She crushed his balls using her high heels and she made him scream like never before. He promised not to piss her off again but she ignored him and went on dominating him.

Lady Karame dominates slave to put him in his lane

Lady Karame chose to degrade this slave with her feet to make him remember that she was not his equal. He had to stick to his lane and she enforced that by degrading him with stinky feet. She asked him to lick her feet and when he was done, she got him to do the same to her boots. She could tell from his face that he would not mess up again. 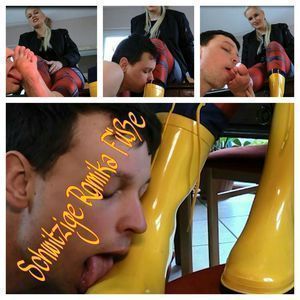 Lady Karame felt that this loser needed to be taught a lesson in good manners so she used ball busting fetish to teach him a lesson. She dominated him by crushing his balls. He was also a hairy man and she shaved him painfully. She had another man help her by facesitting on him and keeping him still. The loser had to change to avoid that sort of punishment again.

Lady Karame ballbusts loser for taking her for a ride

Lady Karame felt that she was being taken for a ride by this loser. She did not like it and she used her high heels to punish him. She crushed his balls and made it as painful as she could. She even crushed the head of his penis to make it more brutal. She was sending a message that she was not going to let him take her for a ride.

Lady Karame had given this guy some work to do for her but she did not like what he had done. She was pissed about it and she tortured him to get what she wanted. She painfully waxed him and she warned him that she would do worse than that if he did not do what she wanted and how she wanted it done. He agreed to do things her way.

Lady Karame was paid to punish this guy and she did it cruelly. She summoned her slave and asked her to help her do it. They pinched his nipples with nipple clamps and they pulled the clamps to make it more painful. They gagged him and whipped his balls too. He had never felt that much pain in his life. He could do nothing about it except endure it as there was no other way out.

Lady Karame squashed the balls of this loser. He had been spreading rumors about her and she had reached a point she had to stop it. She had not minded what he was doing before, but now she felt that it was getting out of hand and was threatening to ruin her reputation. She crushed his balls and she let the pain do the talking for her. He apologized and stopped.

Lady Karame was asked to punish this guy as a test. She wanted to join a group of dominas and they wanted to find out how brutal she was. They did not want softies so they tested her with this guy who deserved to be tortured. She knew the importance of it and she brutally beat his ass. She caged him and she whipped him while naked. They were impressed and let her join them.

Lady Karame despises guys with small dicks. This guy was one of them and he wanted to have some intimate time with her. She could tell he had a small dick because she had experience in spotting them. She pretended to want the same thing he wanted and when they were alone in her bedroom, she ballbusted him instead using her boots instead of having the fun he thought they would.